India is a country of diverse cultures which have their deep roots engraved for a very long time. Every culture has its festivals and all of them have their separate significance.

One such festival is Dussehra also known as Dasara. Here, We will get to know the complete information about Dussehra in English including Puja Vidhi, Puja time, how Dussehra is celebrated in different states of India, and many other details in depth.

Dussehra festival in India is one of the most important, auspicious occasions and major festivals of India.

Meaning of Dussehra comes from a Sanskrit word which comprises two separate words- ‘Dasha’ means ten and ‘Hara’ means defeat, i.e. the defeat of Ravana who had ten heads.

Also, this day falls on the 10th day of the month of Ashvina according to the Hindu calendar.

This Dussehra is a major festival of Karnataka known as Madikeri Dasara. However, is celebrated whole-heartedly in different parts of the country.

People eagerly wait for this time to enjoy and celebrate rituals with their families.

Dussehra, Dasara, दशहरा, தசரா, is also known as Vijayadashami and celebrated as Durga Pooja in prominent eastern states of India.

Dasara is celebrated as the ending of nine days long festival of Navratri. Dussehra celebrations this year will be on Friday, 15th October 2021

History and Significance of Dussehra Festival

Vijayadashami(विजयदशमी) is mainly celebrated to triumph the victory of good over evil. This is why we celebrate Dussehra festival for various reasons among the two most prominent religious communities- Hindus and Jains.

According to mythologists, a demonic king of Sri Lanka named Ravana abducted the wife of Lord Rama from their house by crossing the Lakshmana Rekha.

He was a very powerful demon with extraordinary and magnificent powers. He was given the boon of being indestructible from any attack and had a body of armor.

Lord Rama tried his best to get back his beloved wife. He faced a lot of difficulties and after a big struggle of months finally, he was able to kill Ravana with the help of Ravana’s brother name- Vibhishana.

Vibhishiana advised him to attack the belly button of Ravana with an arrow through his stomach, this resulted in the killing of the demon Ravana.

It is celebrated with the end of Ramleela by burning the huge caricatures of Ravana, Kumbhkarana, and Meghnatha by firecrackers.

This end also marks the advent of preparations for the occasion of Diwali which is celebrated 20 days after Vijayadashami.

Another history behind the significance of Dussehra lies with the theory in Mahabharata. In the month of Ashvina, on the very same occasion, Arjuna alone killed more than 1,000,000 soldiers of the Kauravas.

He also defeated all Kuru warriors which included the most powerful warriors like Bhishma, Drona, Ashwatthama, Karna, and Kripa. It was remarked as the victory of Dharma over Adharma.

The reason for the celebration of Vijayadashami in most of the eastern, northeastern, southern and some northern parts of India is the killing of the buffalo demon Mahishasura.

Goddess Durga defeated the buffalo demon and marked the victory of good over evil and restore Dharma and uproot Adharma from the deep grounds.

How do we celebrate Dussehra

On the day Dussehra festival in India, Clay statues of Goddess Durga, Goddess Lakshmi, Goddess Sarasvati, Lord Ganesha, and Lord Karthikeya are made and worshipped in pandals for nine days.

On the 10th day of Ashvina, these clay statues of Gods and Goddesses are carried to a river or ocean, accompanied by devotional music and chants and finally immersed in the water of the river or ocean. With this farewell, it marks the end of the Durga Pooja.

Every year people wait for the happy Dussehra auspicious occasion to come and to celebrate it with their loved ones. In the year 2021, Vijayadashami 2021 will fall on October 15 which is on Friday. People conduct Dasara Pooja at their homes for wellness and prosperity.

According to Hindu Panchang Muhurats, these Pooja are conducted in all households. Hindus are great believers of such Muhurats and timings, thus it is followed in almost every household.

Shravan Nakshatra also affects the Muhurat of Dussehra. The logic is given below:

However, the timing of Muhurat can vary a little bit according to the city you are residing in but mostly the timings are the same.

India (भारत) is a land of festivals and each festival is celebrated with a great amount of enthusiasm. People thoroughly enjoy it to the fullest with their family members and friends.

Dasara festival in India is celebrated in different parts of the country and with different traditional rituals. Each place has its own traditional significance related to the rituals.

However, one similar thing is at every place, whether eastern, northeastern, southern, or northern parts of India is that there is an arrangement of pandals for a place of worship or Melas near the worship place.

In the pandals, all the clay statues of Goddess Durga, Goddess Lakshmi, Goddess Sarasvati, Lord Ganesha, and Lord Karthikeya are placed and for nine consecutive days, these statues are worshipped.

A lot of people from different parts of the city come to visit the holy place and have a glimpse of this magnificent environment.

People have their transfixed eyes at the beautiful clay statues of Gods and Goddesses in the pandals. On the tenth day, which is Vijayadashami, people bid adieu to them and immerse the clay statues in water.

Big and massive Melas are also arranged near the worship place for the purpose of enjoyment especially Dussehra Mela in Pune.

Things to do on Dussehra:

Huge adventurous rides are placed there, for different age groups ranging from small children to adults. Many small stalls of snack are also there so that you can grab a bite whenever you feel like, and also it has something for all the cravings, whether sweet or spicy. To add to the level of enjoyment, there are also several game stalls that make the experience more memorable.

You can enjoy all the above-mentioned things at almost every place where Durga Pooja or Vijayadashami is celebrated in India.

If we talk about the best places to visit in India on Dussehra where all these things can be experienced in a magnificent manner.

You can count on states which are famous for Dasara like Maharashtra, West Bengal, Bihar, Gujarat, Delhi, Uttar Pradesh.

The best place for Dussehra celebrations can be experienced in these states and once you see it you would want to visit it again and again.

We have tried to bring detailed information about Dussehra in English. However, We will keep updating more about Happy Vijayadashami in the coming days.

Till then We wish you all a very happy and prosperous Dussehra! #HappyDussehra #Greetings #Dussehraquotes #HappyVijayadashami 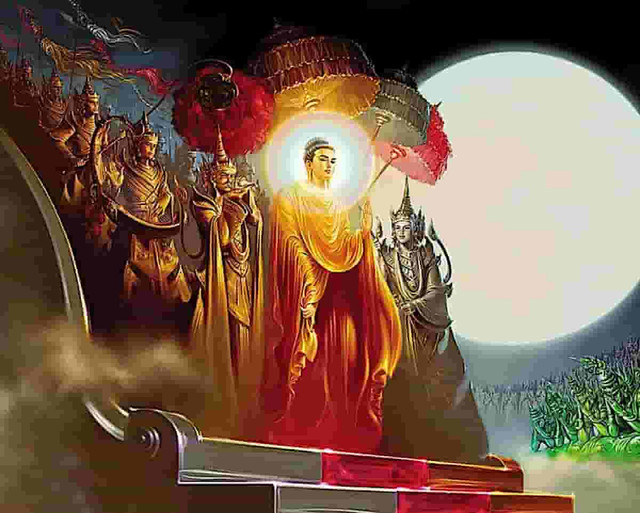